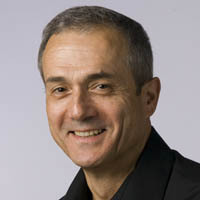 sau din Wikipedia:
Adrian Bejan is an American professor and discoverer of the constructal law of design and evolution in nature. He is J. A. Jones Distinguished Professor of Mechanical Engineering at Duke University.[1]
Adrian Bejan was born in Galaţi, a port town located on the Danube in Romania. His mother, Marioara Bejan (1914–1998), was a pharmacist.[2] His father, Dr. Anghel Bejan (1910–1976), was a veterinarian.[3] Adrian Bejan showed an early talent in drawing, and his parents enrolled him in art school. He also excelled in basketball, which earned him a position on the Romanian national basketball team. As a member of that team he traveled to Bulgaria and Hungary. At age 20 he participated in a math competition. The top six finalists were awarded an application form for an American university. Adrian Bejan was allowed to apply for admission to the Massachusetts Institute of Technology. He was accepted in December 1968 and was allowed to leave for the US in February 1969 [4] at a time when travel was severely restricted by the communist government of Romania.
Adrian Bejan received all his degrees from MIT: BS 1971 (Honors Course), MS 1972 (Honors Course), and PhD in 1975, all from the Department of Mechanical Engineering at MIT.
Adrian Bejan was appointed full professor with tenure at Duke University in 1984. He was awarded the J.A. Jones distinguished professorship in 1989.[1]
Adrian Bejan has published 560 peer-reviewed articles and 25 books.[5] He pioneered numerous original methods in science, such as the constructal law of design and evolution in nature ,[6][7][8][9][10] entropy generation minimization,[11] scale analysis[12] of convection, heatlines and masslines, transition to turbulence, and designed porous media.[13]
He was awarded 16 doctorates Honoris Causa from universities in 11 countries.

Through the Wormhole, with Morgan Freeman

Video : TEDx 2012  How a Single Principle of Physics Governs Nature and Society,

Book : Design in Nature. How the Constructal Law Governs Evolution in Biology, Physics, Technology, and Social Organization (Doubleday 2012)
Posted by Unknown at 1:33 AM